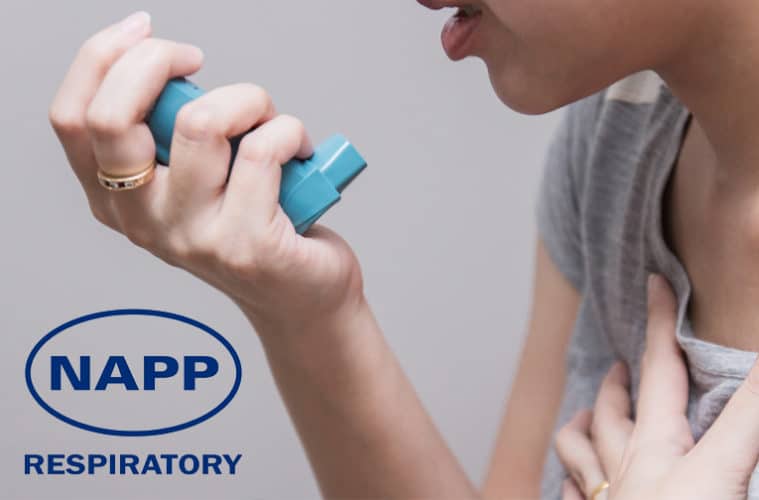 Asthma is a common, longterm disease that requires ongoing management. If you have asthma, you have very sensitive airways – the tubes that carry air in and out of your lungs. Certain triggers can cause your airways to become inflamed and tighten when you breathe. Triggers can include stress, exercise, cold air, and breathing in particular substances such as smoke, pollution or pollen. (British Lung Foundation definition)

The anatomy of an asthmatic attack

Whilst everyone’s airways will react to inhaled irritants, asthmatic patients, due to the underlying low-grade inflammation, over-react. An asthmatic attack occurs in two stages. Initially there is an early asthmatic response characterised by a fall in peak flow rate due to bronchoconstriction. This will resolve within about 3 hours. In atopic individuals excess immunoglobulin E (IgE) is produced and attaches to mast cells. Interaction will allergens cause de-granulation of the mast cells leading to the release of a range of bronchospastic mediators including; histamine, bradykinin and leukotrienes and this results in a late asthmatic response that can last for 12 to 16 hours.

Non-drug
Smoking cessation will improve the management of asthma. The benefits of taking exercise, eating a healthy diet and correcting obesity are evident. Overweight/obese patients will suffer greater morbidity from their asthma. Avoiding allergens (where possible) will help.

Bronchodilators
Beta-2-adrenoreceptors are found within the bronchial smooth muscle. Beta-2 agonists interact with these receptors resulting in bronchial smooth muscle relaxation. In addition, they inhibit mediator release from mast cells and increase mucociliary clearance.
• Short acting(SABA) Salbutamol, Terbutaline
• Long-acting(LABA) Salmeterol, Formoterol
Due to their rapid, almost immediate, onset of action short-acting beta-2- agonists are mostly administered by inhalation as a dry powder (DPI) or a metered dose inhaler (MDI). Beta-2-agonists are not fully selective for beta-2-receptors and can affect beta-1-receptors resulting in the common side-effects, including; tremor, cramps, palpitations, tachycardia, hypokalaemia and peripheral vasodilation.

The long-acting beta-2-agonists have a duration of action of approximately 12-15 hours. They are not intended for relief of acute symptoms but symptom prophylaxis. They are therefore indicated for the control of nocturnal asthma and to prevent exercise induced bronchospasm.

Anticholinergics (antimuscurinic bronchodilators -LAMA)
• Tiotropum
Anticholinergic agents competitively inhibit the action of acetylcholine at
the muscurinic receptors resulting in bronchodilation. Tiotropium is now licensed for the treatment of Asthma; it is not appropriate for the relief of acute bronchospasm.

These drugs should be used with caution in patients suffering from glaucoma, prostatic hyperplasia and bladder outflow obstruction. Sideeffects include dry mouth, nausea, constipation and headache.

These drugs are not effective when administered by inhalation. They have a complex and uncertain mode of action but are effective bronchodilators licensed for the management of asthma. They relaxsmooth muscle, inhibit mediator release, increase mucociliary transport and suppress oedema.

Side-effects associated with theophylline and might be associated with toxicity include; nausea and vomiting, abdominal discomfort, CNS stimulation and sleeplessness. At higher plasma levels (above 35 micrograms/ml) SE’s are potentially lethal including; arrythymias, palpitation, tachycardia and convulsions.

Corticosteroids suppress and inhibit all elements of the inflammatory response; they stop mediators being released from inflammatory cells and suppress the activity of these mediators.

They are particularly effective in the late asthmatic response and have
been demonstrated to;
• Have an anti-inflammatory effect on the bronchial mucosa
• Reduce airways hyper-responsiveness
• Reduce bronchial oedema.

SE’s of the drug, especially following chronic use, are greatly reduced by use of the inhaled route.

These include growth suppression in children, adrenal suppression and
effect on bone metabolism.

These drugs act by blocking the effects of leukotriene (mediators) in the airways and thus have an antiinflammatory effect. They are not for use in acute attacks.

Montelukast has not been shown to be more effective compared to corticosteroids but the two drugs appear to have an additive effect.

SE’s include GI disturbances, dry mouth, thirst and hypersensitivity reactions as well as CNS effects. CSM has advised that patients prescribed LTRAs should be alert to the development of eosinophilia, vasculitic rash, worsening pulmonary symptoms, cardiac complication and peripheral neuropathy.

BTS/SIGN Guidance on Management of Asthma in Adult

It is recommended to start at a step appropriate to initial severity of the condition.
Step 1. Infrequent short lived wheeze
Inhaled short-acting bronchodilator, as required.
Consider monitored initiation of treatment with low dose ICS
Move to step 2 (if uncontrolled)

Stepping down should only occur where the patient has been stable for 3 months. Rescue oral steroids can be used at any step to manage severe asthma exacerbations.

Not all inhalers are equal, there are two specific types:

A spacer device should be used with MDIs to co-ordinate actuation and promote better lung drug delivery whilst reducing the oral deposition of drug.

The breathe actuated MDI devices should be considered when inhalation technique demonstrated is slow and steady but the co-ordination of inspiration and depressing the canister is poor. These automatically release the aerosol when the inspiration reaches the optimum level.

Compliance with the inhaler and dosing regimen are critical aspects of achieving maximal therapeutic outcomes.

The patients’ ability to use any device is a key aspect of inhaler selection. Manual dexterity, understanding of how to use the device, along with knowledge of why they need to use are also of significant importance.

Nebulisers are no more efficient than an MDI device used with a spacer (10 separate puffs delivered over 5-10 minutes) but for some patients, those with only shallow breathing, there might be benefit.