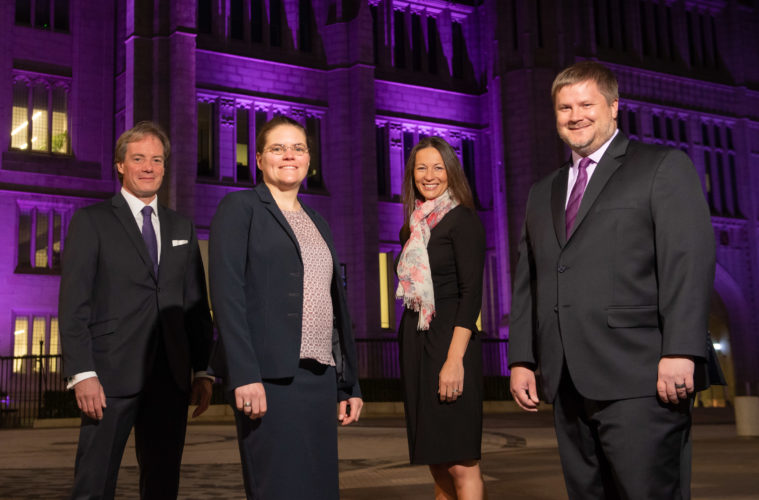 Today (21 September 2021) marks World Alzheimer’s Day, raising awareness of a condition which causes half of the dementia cases in Scotland.

Alzheimer’s Disease (AD) is recognised as one of the world’s greatest unmet medical challenges and currently there is no cure.

In Scotland, two Aberdeen-based companies are pioneering Alzheimer’s research and diagnosis: TauRx Pharmaceuticals, a global leader in tau-based research, and GT Diagnostics which is developing digital tools to enable early diagnosis and monitoring.

Tau-based research is thought to play a crucial part in finding an effective therapy for AD. Healthy tau protein has an important role in the brain, but in AD it can misfold and aggregate. These tau protein aggregates then form tangles, preventing the brain cells from working properly, and causing the cells to die. The presence of these tangles is strongly correlated with symptoms of cognitive decline in dementia.

“Tangles can develop in the brain up to 20 years before any symptoms. This is why early diagnosis and intervention is important,” said Professor Claude Wischik, co-founder and executive chairman of TauRx.

“This year, World Alzheimer’s Month is seeking to shine a light on the warning signs of dementia, encouraging people to seek out information, advice and support. TauRx and its scientists have focused on tau-based research for over 30 years. We are conducting late-stage clinical trials, with the results due next year.

“We hope that we may be able to offer a safe and effective treatment to help many of those affected. Supporting campaigns such as this, to promote the importance of brain health and the organisations providing front line support to people with dementia and their families, is very valuable.”

Developing an effective Alzheimer’s treatment has the potential to transform many lives. But another challenge is diagnosis which is the theme for this year’s World Alzheimer’s Day.

“It is our vision that the diagnostic tools we’re developing at GT Diagnostics will enable earlier and more accurate testing for Alzheimer’s disease. Our tests harness the capabilities of digital and smart psychometric testing to transform the speed, ease and efficacy of diagnostics. Focusing on digital means initial assessments could even become self-administered in the comfort of people’s homes – taking the pressure off the NHS.

“Early diagnosis facilitates early intervention, offering reassurance to those who don’t have the condition, while allowing anyone finding an early indicator to make lifestyle adjustments which could prevent a predisposition developing into more significant symptoms later in life – leading to a better outcome for millions.”

September 2021 marks the 10th  anniversary of World Alzheimer’s Month. In Scotland, over 90,000 people are living with dementia and Alzheimer’s is responsible in half of these cases. Globally this number is expected to triple, rising to 152 million by 2050.

In Aberdeen, the iconic local landmark, Marischal College has been lit up purple to mark World Alzheimer’s Day and raise awareness of the Aberdeen Life Sciences sector.