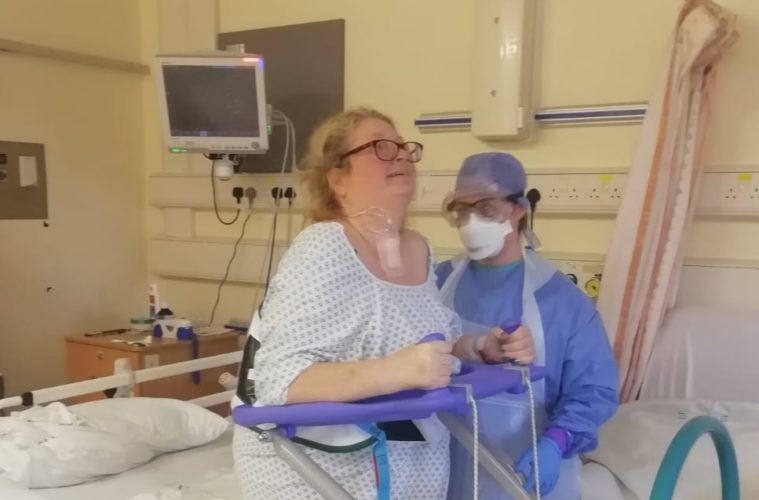 Caroline Ryan has made a remarkable recovery after COVID-19 led to her being in a coma for more than 6 weeks at NHS hospitals in Glasgow and ICU for the best part of three months.

After feeling breathless and unwell, she went to a local COVID clinic before being transferred to the Glasgow Royal Infirmary. She deteriorated quickly.

Caroline explains: “The doctors came in and said I was going for surgery. I didn’t even ask what for. They asked if I had my mobile phone and told me to phone my husband and my family because I might not make it.

“I phoned my husband, Michael, and said listen, ‘they’ve told me I might not make it – keep that boy of ours, Matthew, on the straight and narrow and if I see you, I see you, if not, I love you’. We were all a bit in shock.

“I’m not scared of dying, you’re scared for the people you leave behind.”

Caroline woke up six weeks later in the Golden Jubilee Hospital in Clydebank. She adds: “I couldn’t move. I couldn’t talk, which was worse. I work with people with physical disabilities and I was worried that they had tried to save me but I was left unable to do anything.”

What followed was a long process of rehabilitation which continues to this date. As a manager for the Mungo Foundation, Caroline has devoted her life to caring for people with physical and learning disabilities. One of the first things she did was check her work emails.

She got one of the nurses to take a picture of her in ICU and send it to her colleagues. “I had no idea that my colleagues had been lighting candles and praying for me for weeks. I thought I could just pick up where I left off,” she adds.

But she couldn’t just pick up. COVID had taken an incredible toll on her body. There were times when her family were told she wouldn’t make it. As well as COVID pneumonia, she had renal failure, blood clots, sepsis in her chest and heart complications. After such a long time in a coma, she had to learn to do everything again.

“It was a case of small wins with the rehab,” Caroline adds. “Every day I tried to do something that I hadn’t done before. Whether it was talking, writing my name, moving my ankles and move myself up my bed.”

Caroline was moved back to the GRI for more intensive physical rehab. After three months, she was cheered as she left the hospital – and it came as a huge surprise.

“It was so emotional, such a lovely thing to get clapped out of hospital,” she says. “I was greetin’, my hair was a mess, but when I got out all of my work colleagues were there in their cars, but my husband wasn’t because he was late! Still, I needed to get back to keep my two men at home in line.”

Caroline’s positive attitude was one of the reasons.

Dr George Chalmers, a Consultant Respiratory Physician based at GRI, who was part of the team which looked after Caroline, said: “I’m delighted to see Caroline have such a good outcome. She was extremely unwell with COVID-19 and had other complications, but she has worked so hard to get back to health.

“At the time, COVID-19 was a brand-new illness which none of us had dealt with before, so we had to come together and learn how to adapt very, very quickly. COVID-19 presented new challenges, and patients often had very low oxygen levels or complications that were different from other respiratory infections.

“Caroline is someone who is overflowing with positivity and it’s a real boost to see her coming through that experience.”

Caroline has worked hard with her physios and occupational therapists to get out of her wheelchair and off oxygen. Holidays were always a motivating factor. “You can’t carry an oxygen tank and your duty free at the same time,” she jokes. “One of them had to go!”

Since returning to her work in December she has been promoted and is getting better with each passing day.

But she remains incredibly grateful to the team who provided her with such care and support. She concludes: “I wouldn’t be here without them. From the domestic staff and porters, office staff, right up to the nurses and the surgeons, they all saved my life. The NHS is an engine and it needs all these cogs to work and they are all an inspiration and they were there when I needed them. I’ve never felt so grateful to a group of people in my life. I’ll thank them for the rest of my life.”