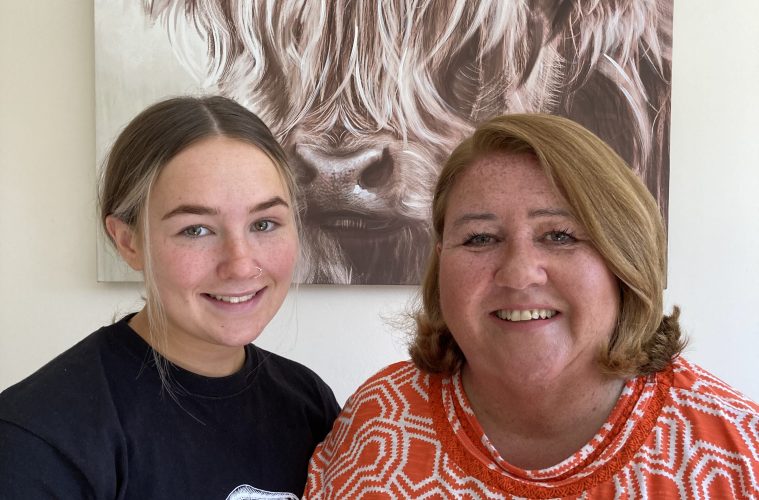 Theatre education coordinator Sharon Westmorland has more reasons than most to remember the move from Law Hospital to University Hospital Wishaw twenty years ago.

The end of May marked twenty years since University Hospital Wishaw – named Wishaw General Hospital until 2017 – opened with 144 patients transferred safely at the time from Law Hospital to the new purpose-built hospital.

Sharon, from Stewartfield, East Kilbride, was 32 weeks pregnant at the time of the move and her daughter Beth, now approaching her twentieth birthday, was born at the newly formed maternity unit a matter of weeks after it opened.

Sharon recalls: “There was some excitement and also apprehension about the move. Law Hospital was very much a community hospital and we had a great community spirit with a lot of the staff born and bred nearby.

“One of my friend’s mother worked there as a nurse during the Second World War, looking after prisoners of war before it became an NHS hospital. There was a lot of history and a connection to Law Hospital but everyone could see the benefits and advantages of moving to a modern, purpose-built hospital.

“The teamwork during the move was fantastic. It was an exciting time and everyone felt well supported. From a patient perspective, there was no comparison. At Law Hospital, patients who were going into intensive care after major surgery had to go in a van through all sorts of weather. Moving to the new site, intensive care was at the end of the corridor from theatre.

“The winter before the move saw Law Hospital cut off in a snow drift. Ambulances were stuck outside and we had to get the army in. I’m sure there were still piles of snow at the side of the road when we left Law Hospital for the final time.”

The move took place on the weekend of May 25. Sharon didn’t have too much time to work in the new hospital before going on maternity leave. She was soon back in her new surroundings though but this time as a patient.

Sharon said: “The maternity unit opened up in the middle of June, a couple of weeks after the initial move. I only had a few weeks working at the new hospital but I was soon back in the new maternity theatres giving birth to my second daughter Beth on Friday 13 July.

“Leading up to the move we had a team at Wishaw to get oriented and a team still at Law. We had to get everything ready to go. On the weekend of the move there was a team of us that stayed at Law Hospital until the Monday to make sure everything was as it should be and the transition to the new site had gone as planned.

“I had worked at Law Hospital since January 1990. I was a senior sister for recovery and anaesthetics, then my role evolved to focus on patient safety and improvement, then into my current role as education coordinator.

“There has of course been changes over the last twenty years in surgery due to technological advances. Patients who used to be in hospital for weeks can be out in days.”

The passing of time has also brought some sadness with the sudden death of University Hospital Wishaw chief of medical services and consultant surgeon, Mr Hakim BenYounes last November.

Sharon said: “We have sadly lost some staff members over the years. Losing Mr BenYounes was a huge blow for the team as we had all worked with Hakim since Law and he was a leader and colleague.”