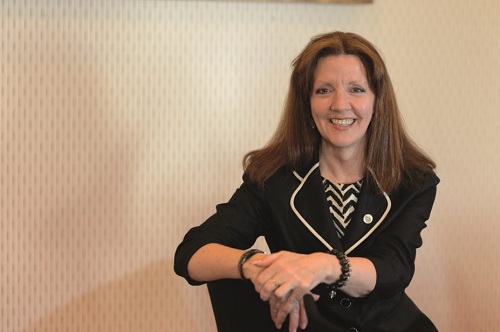 Dr Rose Marie Parr, a Fellow of the Royal Pharmaceutical Society (RPS) has been presented with the RPS Charter Award in recognition of her outstanding contribution to the profession. The Charter Award is made annually by RPS on the recommendation of its President.

Rose Marie qualified in 1982, after graduating from the University of Strathclyde and rose to become Scotland’s Chief Pharmaceutical Officer 2015-2020. During her time in office she launched ‘Achieving Excellence in Pharmaceutical Care’ in 2017, a strategy document to position pharmacy as an integral and enhanced part of a modern NHS in Scotland.

Rose Marie spent her early career working in a variety of hospital pharmacy positions across NHS Health Boards and in 1993 was appointed Director of the Scottish Centre for Pharmacy Postgraduate Education. She subsequently became Director of Pharmacy at the newly formed NHS Education for Scotland and in 2007 was elected as the first Chair of the then RPSGB Scottish Pharmacy Board.

“Rose Marie has had an enormous impact on the practice of pharmacy in Scotland.

“Her leadership skills are outstanding and her ability to create change makes her a force to be reckoned with. Her reputation is not confined to Scotland as she is highly regarded throughout the UK for her leadership, her passion for pharmacy and the work she has done to promote the role played by community pharmacy.

“There are many pharmacists in Scotland today who are able to play a much more clinical role because of her work and she has achieved this by bringing people together in a collegiate way.”

“Thank you to the RPS for bestowing on me this most prestigious Charter Award which has a very distinguished history and recognises the work by individuals for the RPS and the wider profession. I have always been a member of our professional body, ever since I joined the register.

“During my career I was very fortunate to hold the Chair of the Scottish Pharmacy Board during the time of the transition to the professional leadership body, and then in the last few years as part of the RPS Panel of Fellows. It is a great honour and most humbling to see the outstanding work of our Fellows, both new and old, contributing hugely to the profession.

“Pharmacy is a fantastic career. The future of pharmacy is bright and will flourish as we continue to deliver Pharmaceutical Care to the people we serve in our communities.”