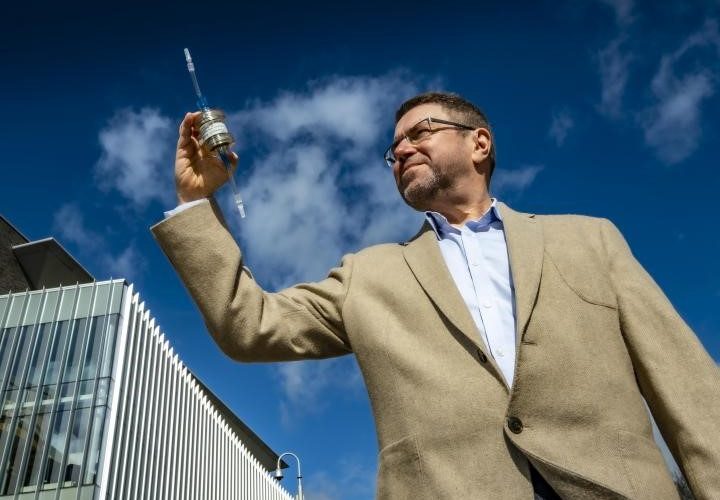 BioCaptiva CEO Jeremy Wheeler with a prototype of the BioCollector device

A university spinout aims to revolutionise the early diagnosis of difficult-to-detect cancers with a new blood-based biopsy device.

BioCaptiva has launched with more than £1 million in seed investment from Edinburgh-based investment syndicate Archangels and Scottish Enterprise.

The company has developed a technology that overcomes a major limitation of current liquid biopsy testing for cancer.

Their device – BioCollector – captures fragments of DNA, known as circulating free DNA or cfDNA from patients’ blood in much greater quantities than is currently possible.

BioCollector is based on a decade of research led by Professor Tim Aitman, Director of the Centre for Genomic and Experimental Medicine, and Professor Mark Bradley of the School of Chemistry.

Prototype testing shows that the device has the potential to detect early-stage cancers in patients without the need for surgical biopsy. It could also pave the way for new approaches to disease monitoring, resulting in better outcomes for patients.

‘I’m delighted that after several years of work with colleagues in Edinburgh, we will now progress towards first-in-human trials,’ said Professor Tim Aitman, Chair of Molecular Pathology and Genetics. ‘BioCollector will provide a step change in the capabilities of liquid biopsy for cancer detection and diagnosis. We are excited to be moving our device into this market with its huge potential for advances in the care of patients with cancer.’

The seed investment will enable BioCaptiva to carry out its first trials to prove its safe use in humans. Should the technology prove successful, BioCaptiva plans to scale up its technology ahead of regulatory clinical trials, scheduled for completion during 2024.

A recent report estimates that the global liquid biopsy market could be worth more than $6 billion by 2025.

BioCaptiva’s formation has been supported by Edinburgh Innovations, the University’s commercialisation service.