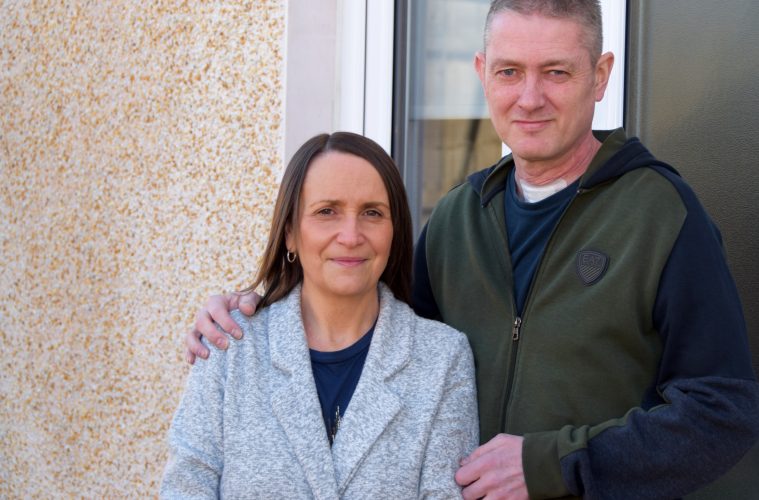 Coronavirus patient Brian McBride spent over two months battling the illness in intensive care – including weeks on a life-saving machine that took over the work of his ailing lungs.

Brian has praised the work of NHS Lanarkshire staff, who treated him at University Hospital Monklands, and their NHS Grampian colleagues, who helped save his life using a specialist treatment called ECMO (extra corporeal membrane oxygenation).

Brian, 47, caught COVID-19 in November and spent 10 days in the intensive care unit (ICU) at University Hospital Monklands before doctors decided he needed to be put on a ventilator in an induced coma.

“It was difficult but I don’t think it really sank in at that point,” recalled Brian, who lives in Plains, North Lanarkshire, with wife Denise and sons Kai, 16 and Robbie, 11.

“I made a video call to Denise to let her know I was going to be ventilated but the boys weren’t on it because it would have been too upsetting.”

Denise, 42, said: “There were lots of tears but I told him it was the best thing as his body needed time to recover. I told Kai and Robbie that dad was going to be asleep for a while.”

However, the Monklands clinicians soon realised that ventilation was not enough to successfully treat Brian and they contacted colleagues at Aberdeen Royal Infirmary, home to Scotland’s only ECMO machine.

The NHS Grampian team raced to Lanarkshire and assessed Brian as suitable for ECMO, which allows the lungs to rest and heal. The process transports blood from the body to an oxygenator (artificial lung) that, like the human lungs, adds oxygen and removes carbon dioxide. The machine then returns the blood to the body via a pump, with the same force as the patient’s own heart.

Brian said: “They took me to Aberdeen on 2 December and I was unconscious on ECMO for a couple of weeks. When they brought me round I didn’t know what was going on or where I was – I thought I was in a portable cabin or somewhere in New Zealand or America.”

He continued to receive ECMO after he awoke and he also needed six procedures due to complications with his tracheostomy – the opening in the neck to place a tube in the windpipe.

Denise was delighted when he was able to make a call on Christmas Day through the NHS Near Me video appointment service.

She said: “He couldn’t speak but communicated by writing on a white board. It was a wonderful Christmas gift to see him more like himself and asking questions about home.”

Brian came off ECMO on 31 December and returned to the ICU at Monklands on 5 January, transferring to a ward two weeks later to be helped to walk and speak again through intensive physiotherapy and speech and language therapy.

Since being discharged from hospital on 27 January, Brian has been slowly regaining the nearly four stone in weight he lost during treatment, and has been continuing exercises to regain his strength after his muscle-sapping ordeal.

“I can’t thank the NHS staff in Lanarkshire and Grampian enough,” he said. “They were all fantastic and went above and beyond.”

His challenging 73 days in hospital – 64 of them in ICU – has left Brian and Denise counting their blessings.

Brian said: “I’m just taking each day as it comes and not thinking too far ahead.”

“Don’t take tomorrow as a given,” Denise reflected.

Dr Sanjiv Chohan, University Hospital Monklands clinical lead for ICU, said: “ECMO is a treatment that can help some patients with the most severe COVID, and Brian is one of the Monklands patients to have benefited.

“We’re all delighted to see he is recovering following the wonderful care he received from NHS Lanarkshire staff and our colleagues in Aberdeen.”