QEUH lights up red to show raise awareness for encephalitis

The Queen Elizabeth University Hospital in Glasgow (QEUH) is shining red this week to help raise awareness of encephalitis.

The hospital joins a number of global landmarks including the Niagra Falls, the Danube Bridges, The Liver Building and the Jet d’Eau in Geneva to light up red and raise awareness for the deadly illness which affects up to 500,000 people every year, including 6,000 in the UK.

Pauline Murray, 52, picture below, was diagnosed with autoimmune encephalitis in 2015.  After feeling palpitations, dizziness and feeling anxious and despite a number of consultations, it was an eventual MRI scan which revealed her a swollen right hippocampus – at which point she was admitted to the Institute for Neurosciences at the QEUH where she remained for over a month. Pauline, who works as a nurse at Crosshouse hospital in Ayrshire said:

Encephalitis is inflammation of the brain and is caused by an infection invading the brain (infectious encephalitis) or by the immune system attacking the brain in error (autoimmune encephalitis). It usually causes seizures, deterioration in cognition or memory, odd behaviour or confusion as well as other neurological impairment.

The condition can impact children and adults and can be fatal. Those who survive can be left with an acquired brain injury, with cognitive, physical, emotional, behavioural, and psychosocial consequences. An early diagnosis is key to minimising the damage the infection or autoimmune disease can cause.

In 2016 the Neuroimmunology Laboratory at the QEUH expanded its diagnostic testing to include the antibodies that cause autoimmune encephalitis. Prior to this samples had to be dispatched to other parts of the UK or further afield for testing, with results often taking more than a month to be reported. Now they are available within days or hours when required. This has hugely impacted the early diagnosis and treatment of patients with this devastating type of encephalitis.

“Encephalitis is a vicious illness and not enough is known about the warning signs – which are crucial to help catch it early and minimise the damage it causes. That’s why it’s really important we’re able to help raise awareness so that others can be diagnosed earlier.” 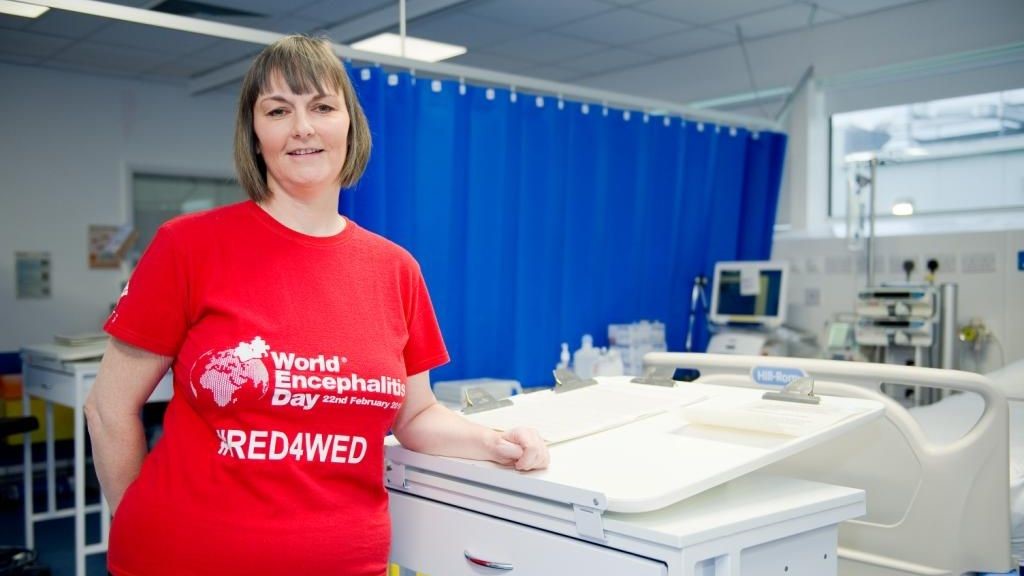 Nearly five years on, Pauline is still recovering, having suffered a relapse of the autoimmune disorder in 2018. As part of the National Encephalitis Society, she spends her spare time further raising awareness of the virus.

“The QEUH prides itself in being able to play a role in raising awareness for worthy causes such as this one. Encephalitis can impact anyone, so it’s really important people are able to recognise the symptoms and get the care they need as soon as possible.

“While lighting the building up may be a small gesture, we know that combined with all of with the involvement of other key landmarks, that it will go a long way to helping raise awareness of encephalitis.”