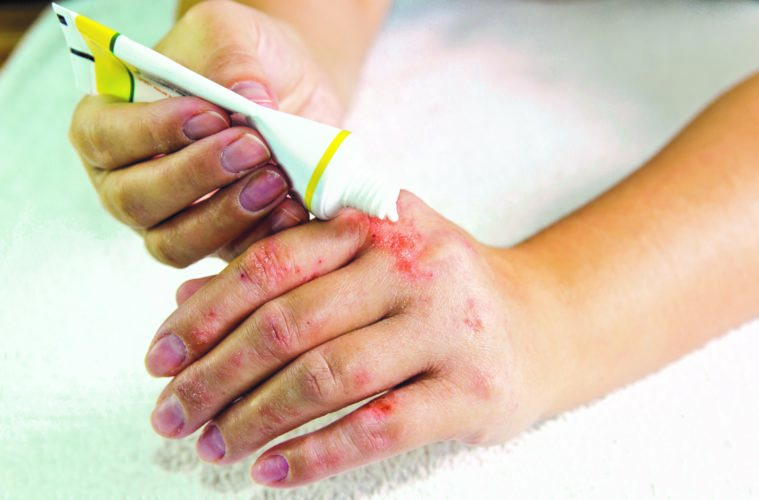 A BIG HAND FOR MOISTURISERS!

As COVID-19 enters its second wave, pharmacists are in an ideal position to advise patients on reducing the possibility of dry skin conditions through the use of emollients…

With COVID-19 still rife at present – and for the foreseeable future – the issue of hand washing and hand sanitising is going to be around for quite some time.

At the outbreak of the pandemic, the World Health Organisation (WHO) urged everyone to maintain good hygiene practices, primarily because coronavirus is a respiratory infection, and is believed to spread in cough droplets.

As such, one of the key protective measures suggested was to wash hands with soap and water for a minimum of 20 seconds as many times as day as possible and when necessary.

Since then, millions around the world have carried out this practice at home and in their workplace, using hand sanitiser when washing isn’t possible.

Laboratory studies have shown that alcohol-based hand sanitisers made from 60 per cent ethanol and 70 per cent isopropanol are able to inactivate viruses genetically related to COVID-19.

Little wonder then that by February of this year – as fear of the oncoming pandemic – sales of hand sanitiser in the United Kingdom had, according to Kantar Worldpanel, soared by 255 per cent!

While hand washing is the primary means of maintaining good hygiene, however, both the excessive hand washing and overuse of hand sanitisers are now causing problems of their own, with many experiencing a range of skin barrier disorders and triggering conditions, such as allergic dermatitis and eczema.

The reasons why excessive hand washing will dry out the skin are obvious, but sanitiser also contains ingredients, which are exacerbating the dryness. One of the primary risks posed by alcohol-based sanitisers are that they can strip skin of oil and water, which can result in rough hands, if applied in excess.

Although they are now a staple of most people’s daily routine, when sanitisers first came out, there was actually little research to show what they did or didn’t do. Now, as a result of the current pandemic, scientists are looking into the hand sanitiser market to find out exactly the effect that they have on the skin.

Concern was also recently expressed by chemical products company, Kao Corporation, whose spokesperson suggested that excessive use of hand sanitiser may also INCREASE the risk of infection.

‘Of course, it is necessary to wash hands and use alcohol-based hand sanitisers in order to reduce transmission of the new virus,’ the spokesperson said, ‘but overdoing anything is not good. Dry and damaged skin could become a hotbed of disease bacteria and also increase the risk of viruses entering the body through cuts in the skin.’

The active ingredient in hand sanitisers is either isopropyl alcohol, or a similar form of alcohol (ethanol or n-propanol), or a combination of the two. Alcohol has long been known to kill microbes by dissolving their protective outer layer of proteins and disrupting their metabolism.

Prior to the coronavirus, various studies had shown that sanitisers had an important role to play in slowing the spread of various viruses.

In 2019, for example, a study on hospital-borne infections showed that sanitisers could help to slow the spread of MRSA and other infections, mainly because they provided healthcare workers with a quick and convenient way to keep their hands hygienically clean.

In 2015, research had also shown that alcohol-based sanitisers were able to reduce the populations of salmonella and E coli.

A Japanese study of elementary schools, meanwhile, showed that intensive hand sanitiser use may have cut short-term rates of norovirus. The study showed that the sanitisers had cut absences due to illness by 26 per cent and reduced confirmed cases of illness from the highly-contagious influenza A virus by 52 per cent.

While this is all great news for preventing the spread of infection, however, the simple fact is that the excessive hand washing and overuse of hand sanitisers is damaging people’s skin.

Why do sanitisers dry skin out?

That’s because the skin has a permeability when it is balanced. Part of that permeability is produced by oil and ceramides – a type of fat. If the skin’s integrity is compromised, or if it begins to become rough or cracked because of the overuse of the sanitiser, then the structure and permeability of the skin are compromised, leading to the dryness.

Put simply, the alcohol dries out the skin simply by reducing the amount of natural oils that it contains.

In addition to the alcohol content, hand sanitisers also contain other ingredients, which can be quite astringent.

Triclosan, for example, is an ingredient that is often added to many consumer products that are intended to reduce or prevent contamination. As such, it is added to some antibacterial soaps and body washes, toothpastes, cosmetics and, of course, hand sanitiser.

In addition to the problems that products like triclosan cause for hands, there are also health risks associated with it. In 2017, for example, the Food and Drug Administration in the United States banned the use of triclosan in personal hygiene products following a study which showed that it could impact negatively on the body’s hormonal system!

There are also studies, which have shown that ethanol – another ingredient of hand sanitiser – can affect the estrogen receptor in the body, which can lead to certain types of cancer, such as breast cancer.

So what can be done to help the skin?

COVID-19 will, it seems, be around for a considerable period of time and so it’s vital that the skin is hydrated and moisturised in order to provide it with a protective film to trap moisture. That’s where emollients can play a vital role.

The benefits of emollients

Emollients are medical moisturisers, which are used to treat a range of skin conditions.

Emollients have been used for over 5,000 years and they form an essential part of the therapy for all dry skin conditions, including atopic and contact eczema. They’re safe and effective and, by introducing a good skin care routine using emollients, patients can soothe, moisturise and protect the skin: steps which are particularly important at this time.

Emollients are extremely effective since they impact dry skin. Changes in skin moisture levels cause a reduction in the barrier function, which, in turn, increases water loss. An impaired skin barrier also allows the penetration of substances, which can irritate or cause an allergic reaction.

Itching is another major, distressing symptom of dry skin, particularly when it comes to the hands, and the patient can end up with an itch-scratch-itch cycle. Scratching also leads to the release of histamine, a chemical in the body which makes the itching worse, and this can lead to skin damage.

Emollients relieve the itch, producing an oily layer over the skin surface, which traps water beneath it. The resulting restoration of the skin’s barrier function by emollients prevents the penetration of irritants, allergens and bacteria, thereby avoiding or reducing the development of infection.

There are many types of emollients, which can be classified according to how they are applied/used.

Leave-on emollients are available as lotions, creams, gels, sprays and ointments, and are applied directly to the skin:

• Lotions contain more water and less fat than creams. Because of their high water content, lotions need to contain preservatives, which patients can become sensitised to, although this is rare. Lotions spread very easily and are cooling, but are not that effective at moisturising very dry skin. This is because they are not thick enough to repair the skin barrier. As such, they are useful for ‘hairy’ areas, or for quick absorption if the patient is short of time

• Creams contain a mixture of fat and water, and feel light and cool on the skin. They are quite easy to spread over dry or sore skin and are not greasy, so many people prefer them to ointments for daytime use. Like lotions, creams need to contain preservatives, which can cause sensitivity in some people. Creams need to be used liberally and applied frequently (every three to four hours) to effectively repair the skin barrier and stop the skin drying out. Humectant creams (containing natural moisturisers such as urea and glycerine) effectively repair the skin barrier and need only be applied every six to eight hours.

• Hydrating gels are relatively light and non-greasy, despite having a reasonably high oil content. They should be applied every three to four hours. Some gels contain humectants, in which case, they only need to be applied every six to eight hours. Emollients make the skin feel more comfortable and less itchy. They keep the skin moist and flexible, helping to prevent cracks. In previous years it’s probably fair to say that emollients tended to be underused, since people often perceived them to be inactive moisturisers.

Now, however, if used correctly as a daily skincare regime for the hands, they can become effective ‘active treatments’ for the dry skin caused by excessive hand washing and overuse of sanitising gels.