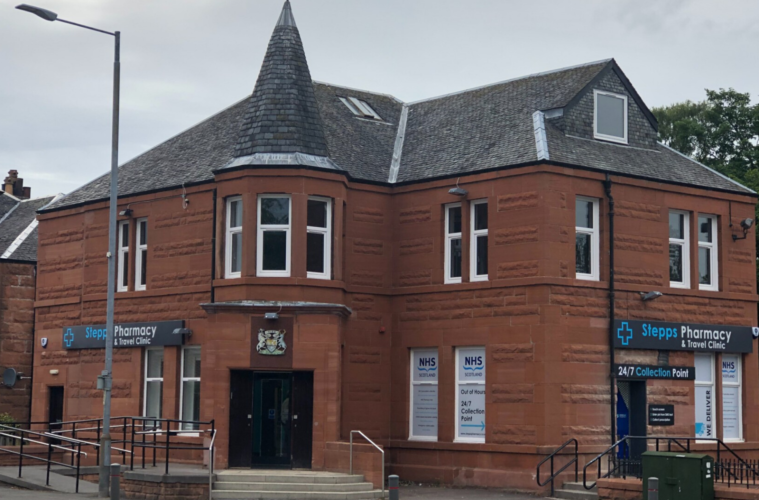 Stepps Pharmacy is a long-standing unopposed pharmacy located on the main street in Stepps, ideally situated close to two GP practices.This sale completion was subject to a minor relocation and the buyer agreeing to lease a new premises and carry out a refit. Stepps Pharmacy now sits along the road on the opposite side from its original site, in a former Royal Bank of Scotland building. Thanks to the new location, there is now tremendous scope for further business development, such as the opportunity to expand upon the services income to include a travel clinic.

Stepps Pharmacy was previously owned by Mr Eddie Ceresa who has decided to sell in order to pursue retirement. Mr Ceresa comments, “Stepps Pharmacy was established in 1973 in the village of Stepps located north of Glasgow. From small beginnings, it was classified as an essential pharmacy serving one single-handed GP practice dispensing fewer than 1000 prescriptions per month, to over 7000 today. It was fully refitted in 2003 to accommodate changing business patterns but the unit at 140 Cumbernauld Road was constrained by its small footprint. In November 2018, with my retirement long overdue, I acquired the old RBS building with the view to relocating to a premises twice as large and selling the business…

While I had come to the end of my career in pharmacy, I saw a great future for the development of the new Stepps Pharmacy at a larger premises in a prime location with car parking facilities. In the hands of Ron Badger, a like-minded young experienced pharmacist, with a similar work ethic and modern ideas a positive outcome of this venture is on the cards. At long last I am happy to finally retire and wish Ron great success. I would also like to thank Christie & Co, and Karl Clezy in particular, for their care, sensitivity, assistance and support in brokering the sale.”

The business has been purchased by Mr Ron Badger who lives in Glasgow and previously owned pharmacies in central and east Scotland. Mr Badger wanted to own a pharmacy closer to home and knew straight away this was the ideal opportunity for him to get involved in. Mr Badger has a great vision for the business going forward and has already installed a dispensing robot and a new 24/7 dispensing vending machine at the side of the building to make it more convenient for customers to collect their prescriptions. Commenting on his new acquisition, he said, “With the added complications of a refit and lockdown, I am delighted to get this purchase completed and the business is already benefiting from the relocation to larger modern premises.”

Karl Clezy, Director of Medical at Christie & Co, who handled the sale, comments, “We received five offers for Stepps Pharmacy, despite a new contract application that was submitted less than one mile away in the Stepps area. The new application was rejected before the sale completed. It wasn’t your typical pharmacy sale due to the new owner organising a shop refit of the new site whilst the legal process was progressing. On completion day, Ron’s first day of trading was in the new premises.”

This purchase of Stepps Pharmacy was supported by Christie Finance. Craig Dickson, Director at Christie Finance, comments, “The pharmacy has recently relocated to larger premises albeit on the same street as the previous shop. Ron and Lynne have refurbished and fitted out the property to a high standard and have exciting growth plans for the business, which I’ve no doubt will be well received by the local community and be a great success. I wish them the best of luck in taking the business forward.”