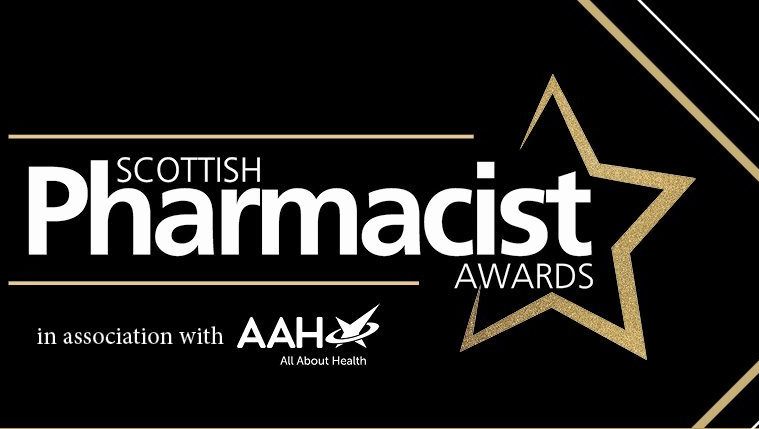 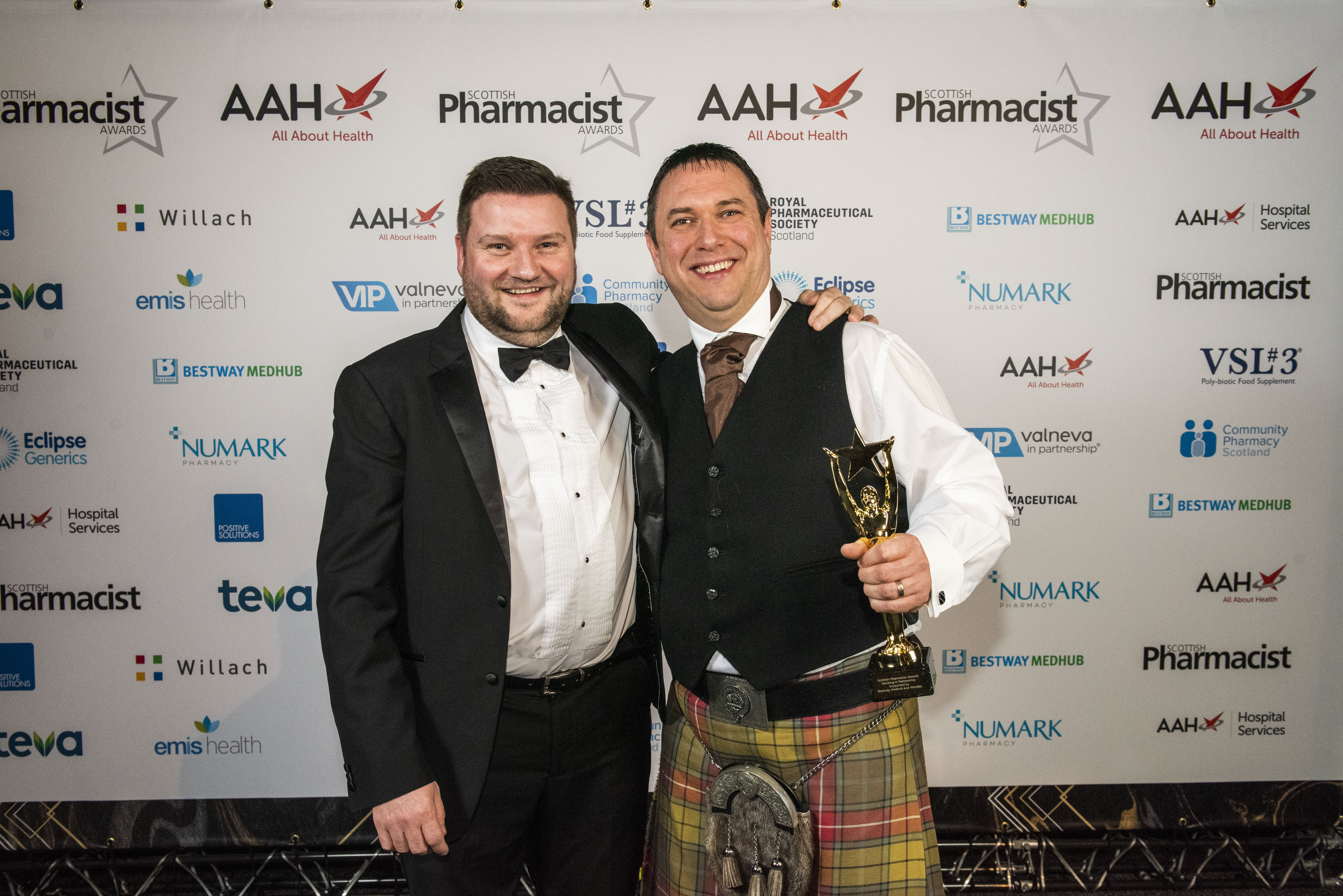 DAVIDSONS CHEMIST, BRIDGE OF EARN, WINNER OF THE WORKING IN PARTNERSHIP AWARD SUPPORTED BY BESTWAY MEDHUB

Davidsons Chemist in Bridge of Earn picked up the Working in Partnership Award (Sponsored by Bestway Medhub) after being very involved in transferring 3500 patients from the local GP surgery to others in the vicinity last year. The pharmacy was only given eight working days’ notice that the GP surgery was to close and worked collaboratively with other healthcare professionals to ensure that the transfer was as smooth as possible for the patients. 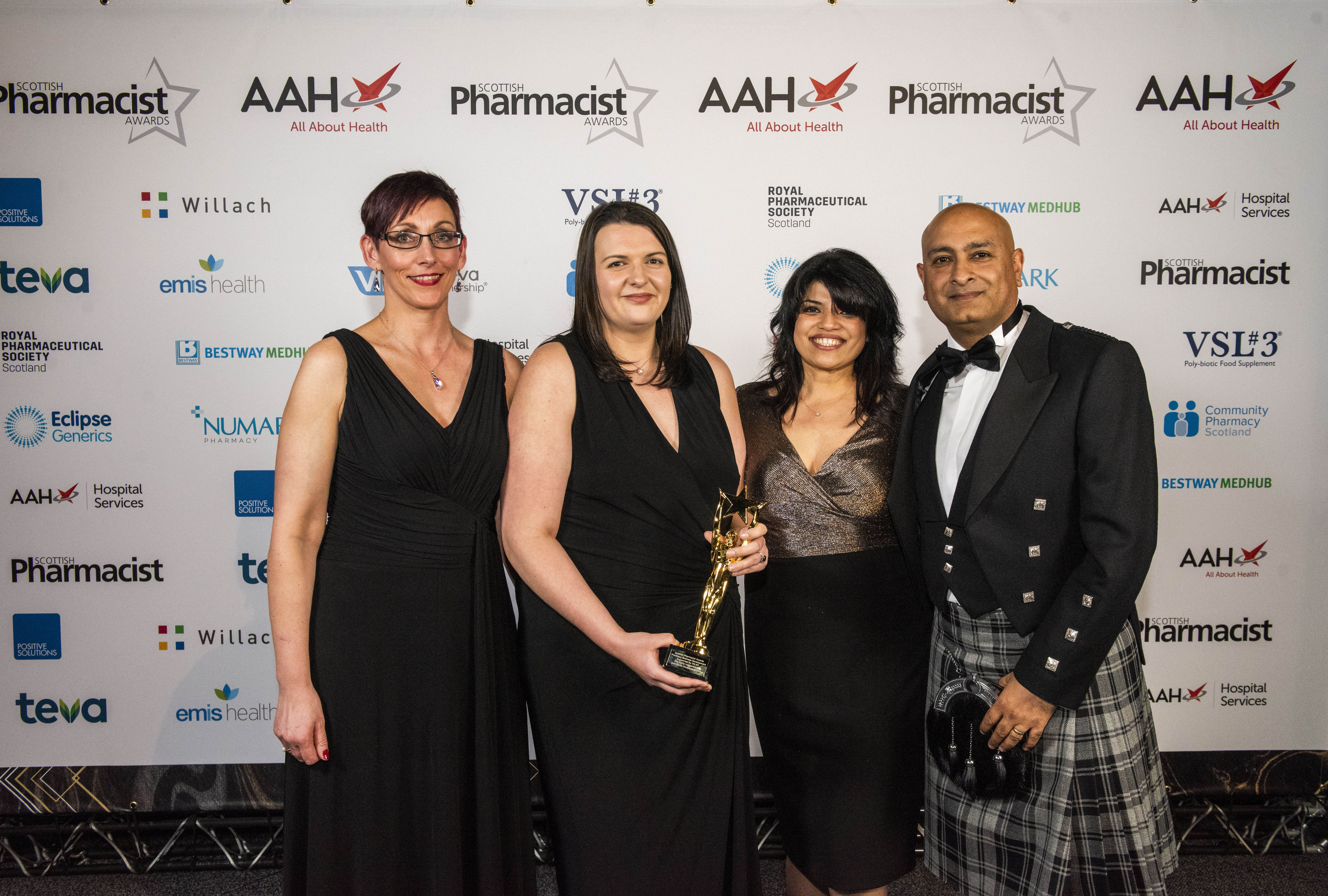 Well Pharmacy in Alloa were the proud recipients of the Pharmacy Business Development Award, (supported by VSL#3, the highly concentrated poly-biotic food supplement) as a result of the terrific refit that was carried out to the premises and to the pharmacy services last year.

As a result of the significant refit, the working environment for the team has greatly improved and, as a result of the new state-of-the-art appearance of the pharmacy, the patient experience has also been greatly enhanced.

The judges were extremely impressed by both the pharmacy refit and by the fact that the team continued to provide a high level of service to their patients.

‘Throughout the lengthy process of a difficult refit,’ the judges said, ‘along with significant changes to their way of working, Well Alloa have continued to excel at a breadth of pharmacy services. Their close relationships with the local NHS Board, resilience and patient have paid dividends for the local patients, who are now better served with a pharmacy for the future.’ 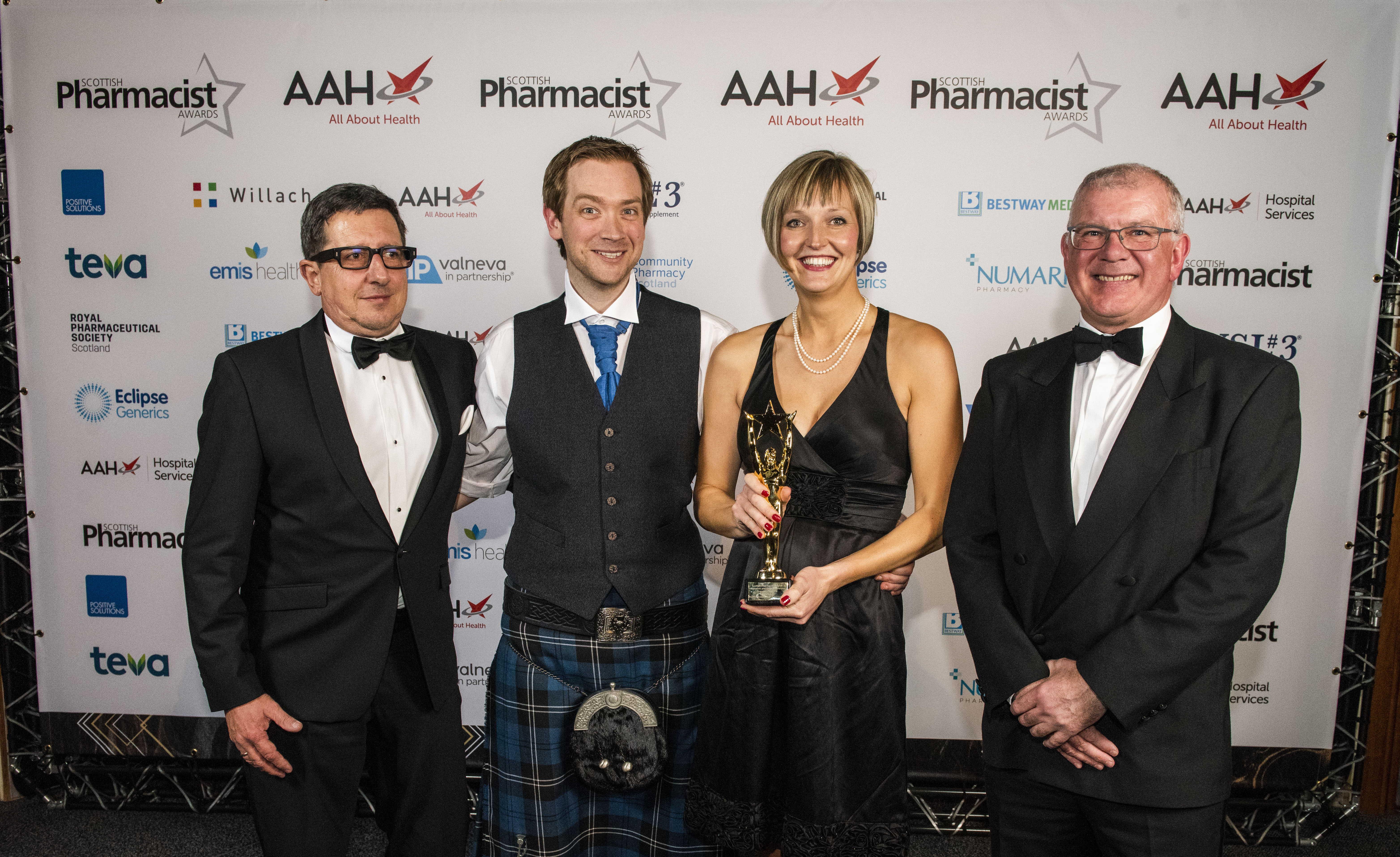 The Community Pharmacy Pharmacotherapy Team, which is based in Prestwick. The team runs a Common Clinical Conditions Clinic in collaboration with local GP pharmacist, Alan McGeer.

Thanks to their great work, the team picked up the Innovation & Enterprise Within Pharmacy Practice Award (Supported by Positive Solutions and Willach UK), with the judges highlighting how a ‘potential area of conflict and challenge can be resolved by collaboratively working towards a common goal, harnessing and utilising the strengths within each sector to achieve a harmonious outcome’. 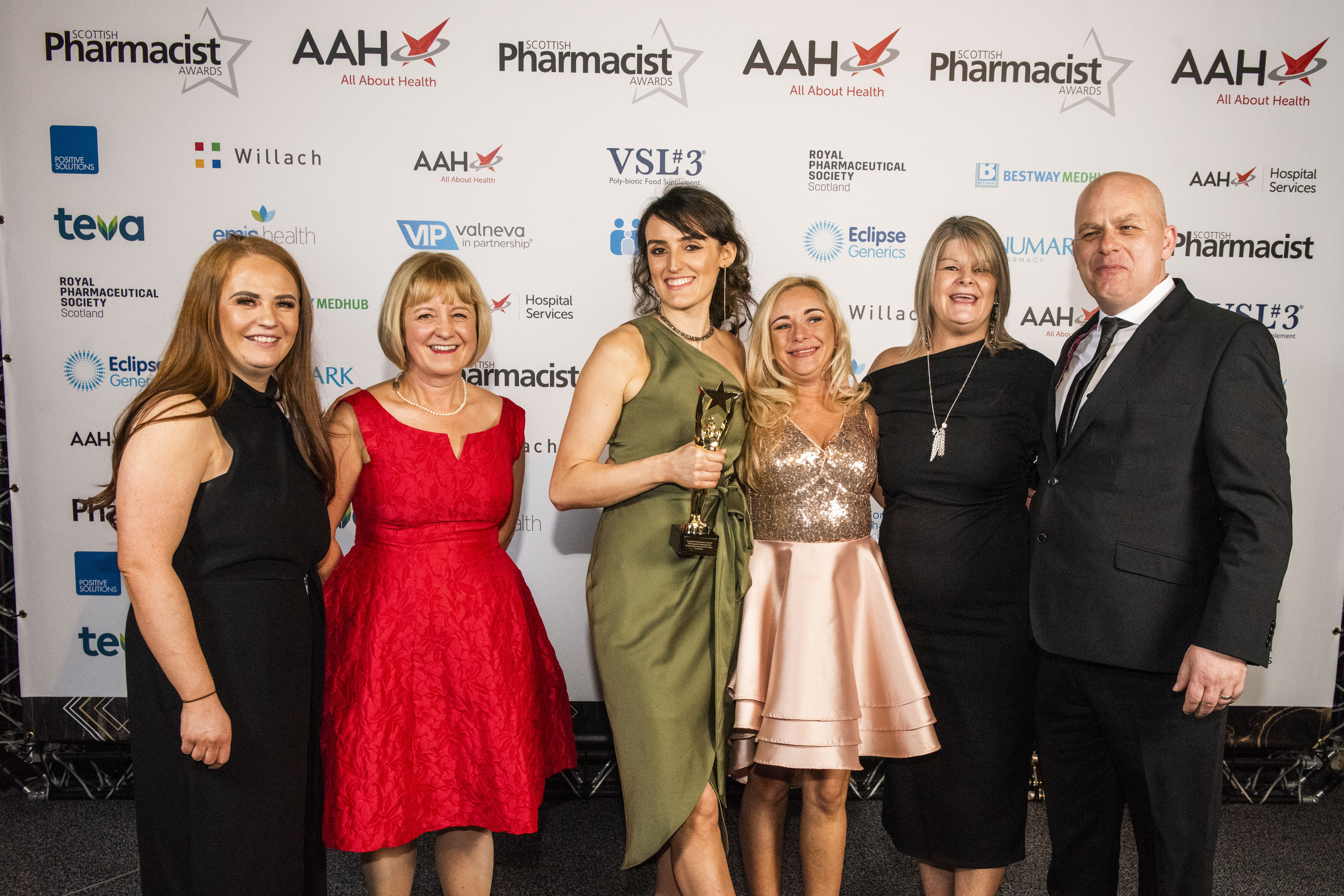 Melville Chemist at Fernhill, part of the M&D Green Group, picked up the Training & Business Development Award (Supported by Royal Pharmaceutical Society Scotland) for carrying out research into the needs of its elderly patients in order to provide an excellent service for care homes across Scotland.

The judges commended the team for identifying a ‘clear training need’ and developing an in-house training manual, referring to it as a ‘very impressive contribution’. 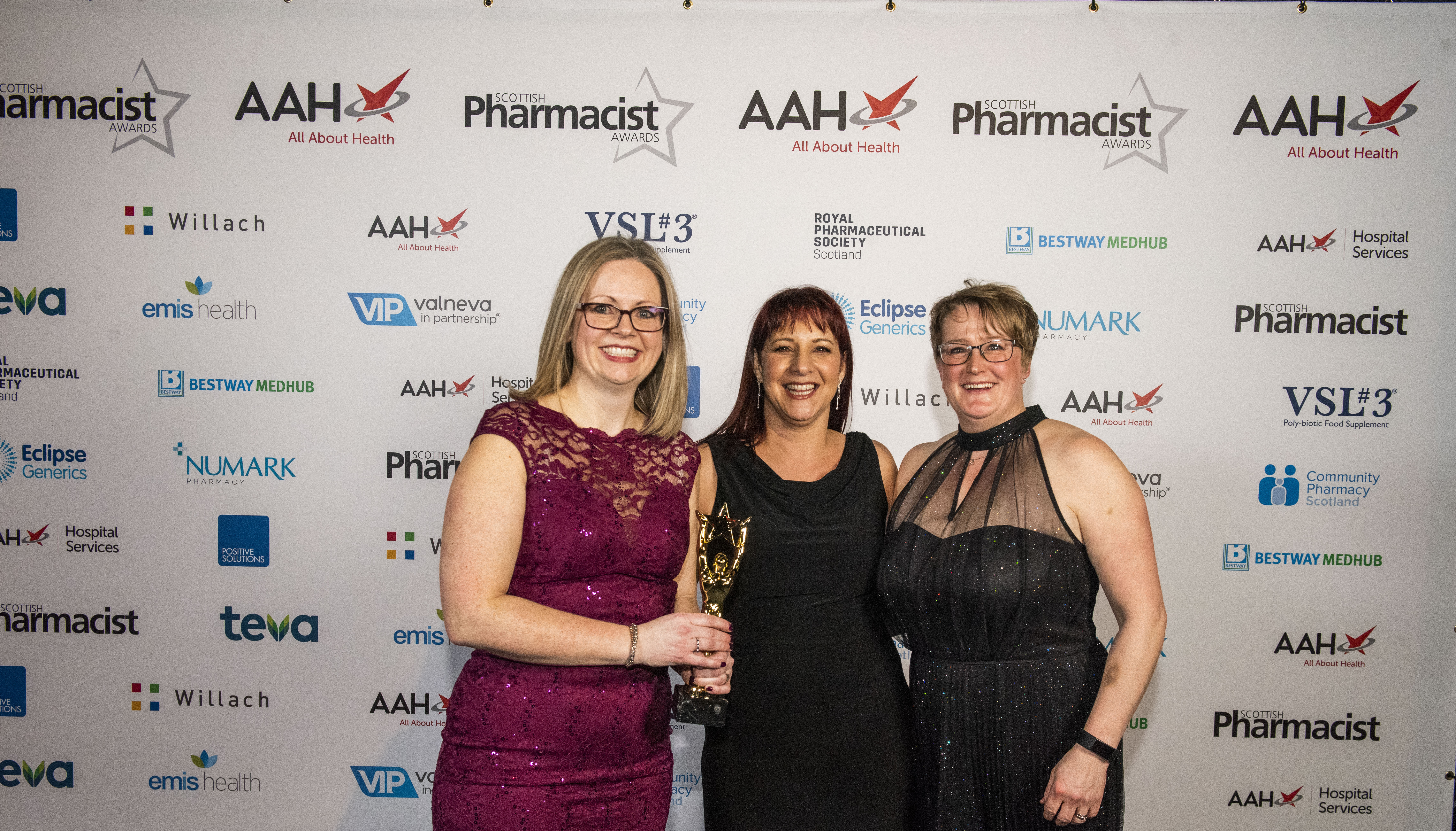 BARNTON PHARMACY, WINNER OF THE MANAGEMENT OF TRAVEL HEALTH IN COMMUNITY PHARMACY SUPPORTED BY VALNEVA IN PARTNERSHIP

Barnton Pharmacy picked up the Management of Travel Health in Community Pharmacy Award (Sponsored by Valneva in Partnership) on Saturday night and owners, Sally Arnison and Leanne Carey, were there to accept the plaudits of their peers and colleagues.

The judges for this award were very impressed by the seamless referral process that Sally and Leanne have established in the pharmacy so that vaccines can be provided for the local community as and when necessary.

‘It is obvious,’ the judges said, ‘that a holistic approach is adopted in regard to all aspects of this service and the pharmacy owners have responded to customer demand and identified a local need.’ 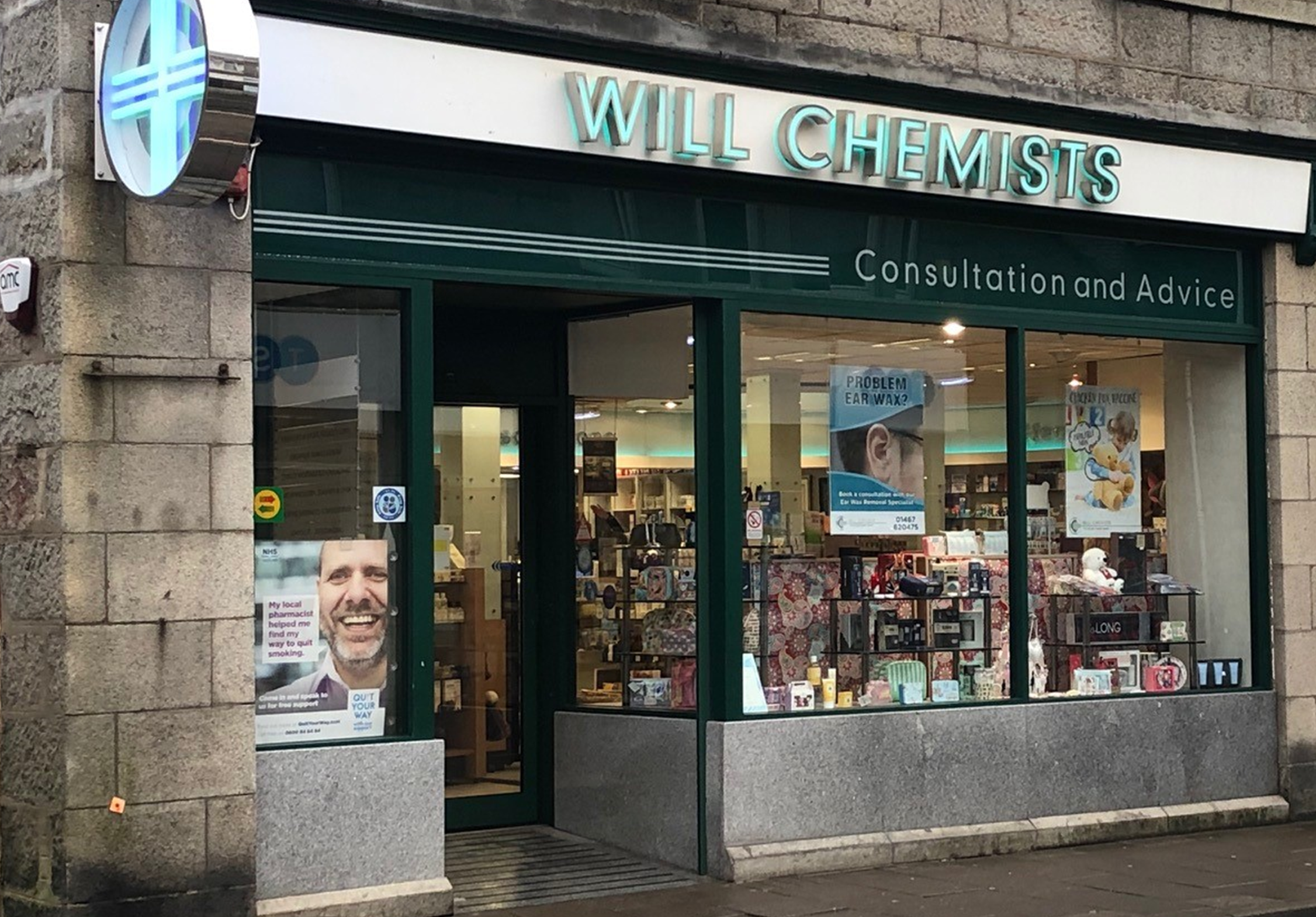 WILL CHEMISTS, INVERURIE, WINNER OF THE EXCELLENCE IN COMMUNITY PHARMACY PRACTICE AWARD SUPPORTED BY SCOTTISH PHARMACIST

It was ‘all ears’ on Saturday night as one Aberdeenshire community pharmacy scooped a major accolade at the highly-esteemed Scottish Pharmacist Awards.

Will Chemists in Inverurie picked up the award for Excellence in Community Practice thanks to its superb ear irrigation service that has not only been great news for its patients but has also reduced NHS waiting lists. 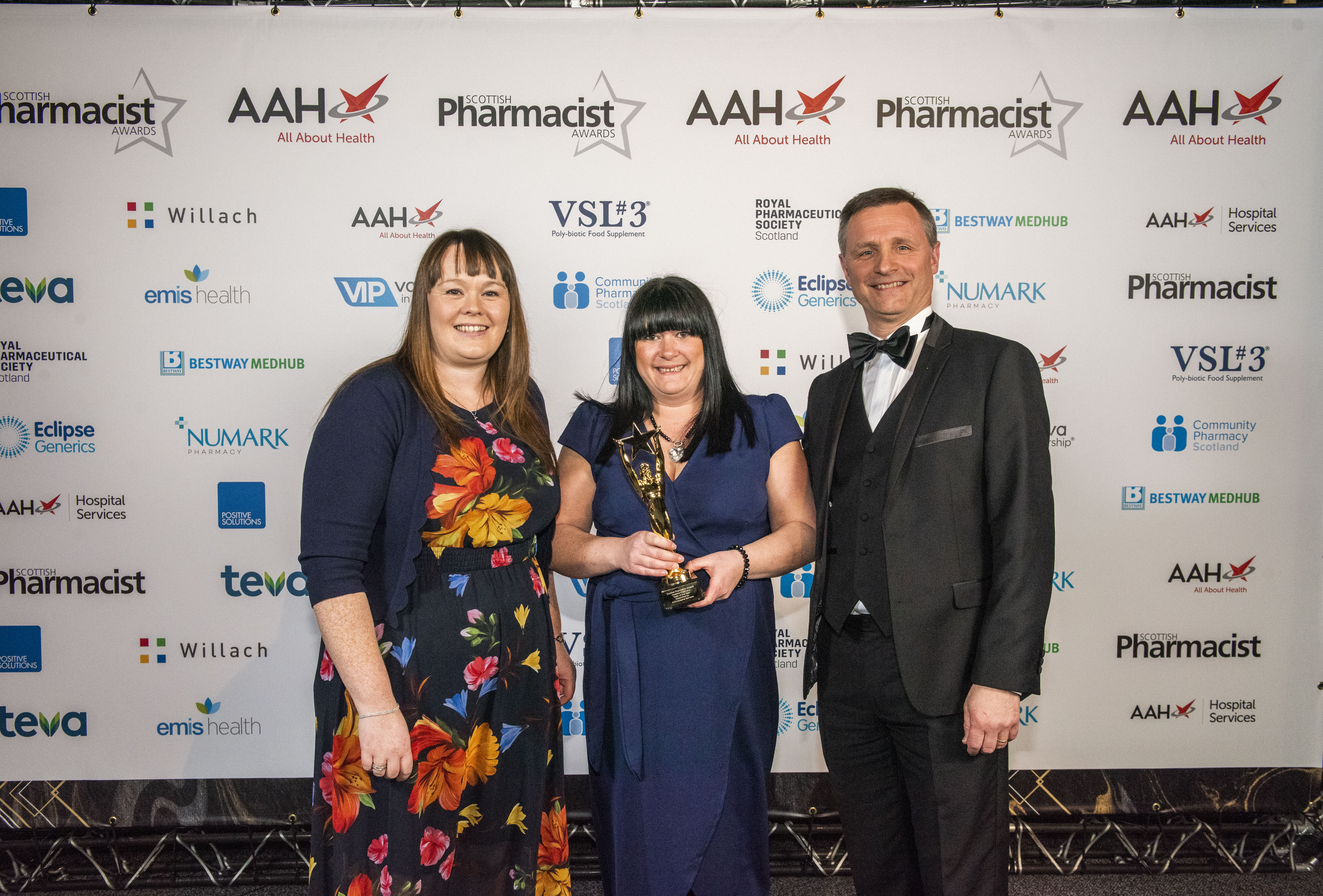 Scotland’s increasing ageing population can heave a sigh of relief today knowing that they’re in great hands! That’s because the Care at Home Pharmacy Technician Service, which operates in the South and East Ayrshire region scooped a major accolade at the highly esteemed Scottish Pharmacist Awards!

The team walked away on Saturday night with the coveted Hospital Team of the Year Award (Supported by AAH Hospital Services) thanks to the work that they do in visiting patients in their own homes to review compliance with medicines and referring, where necessary, to other services.

The judges were particularly impressed by the team’s ‘great integration with health and social care’ and referred to it as a ‘new and exciting development of technicians using all their skills and providing convenient patient care’!

Well done to all involved! 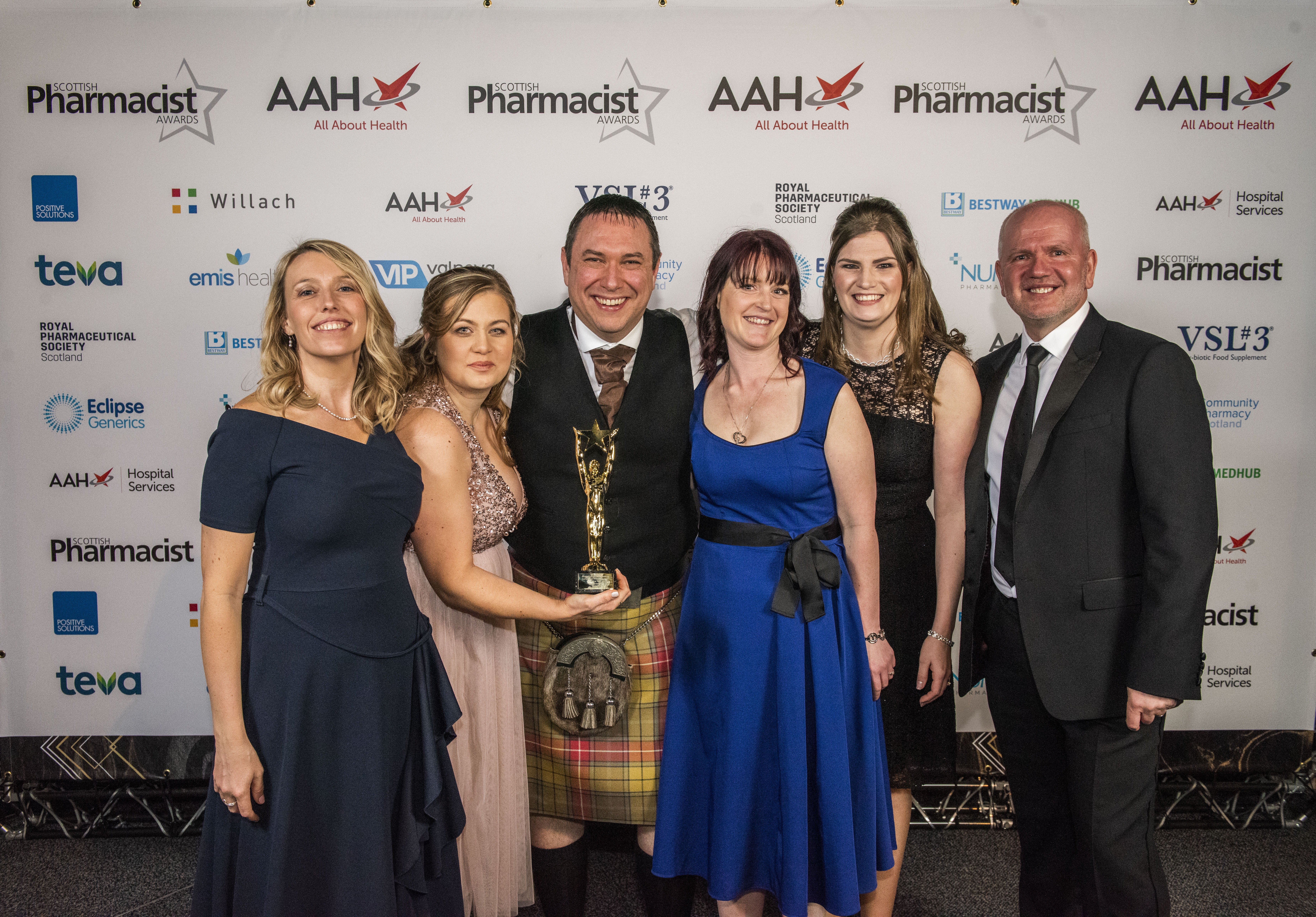 DAVIDSONS CHEMIST, BRIDGE OF EARN WINNER OF THE COMMUNITY PHARMACY TEAM OF THE YEAR AWARD SUPPORTED BY NUMARK

Davidsons Chemist, Bridge of Earn, took to the stage for the second time on the night to

pick up the illustrious and highly-coveted Pharmacy of the Year Award (Sponsored by Numark).

Congratulations to all involved! 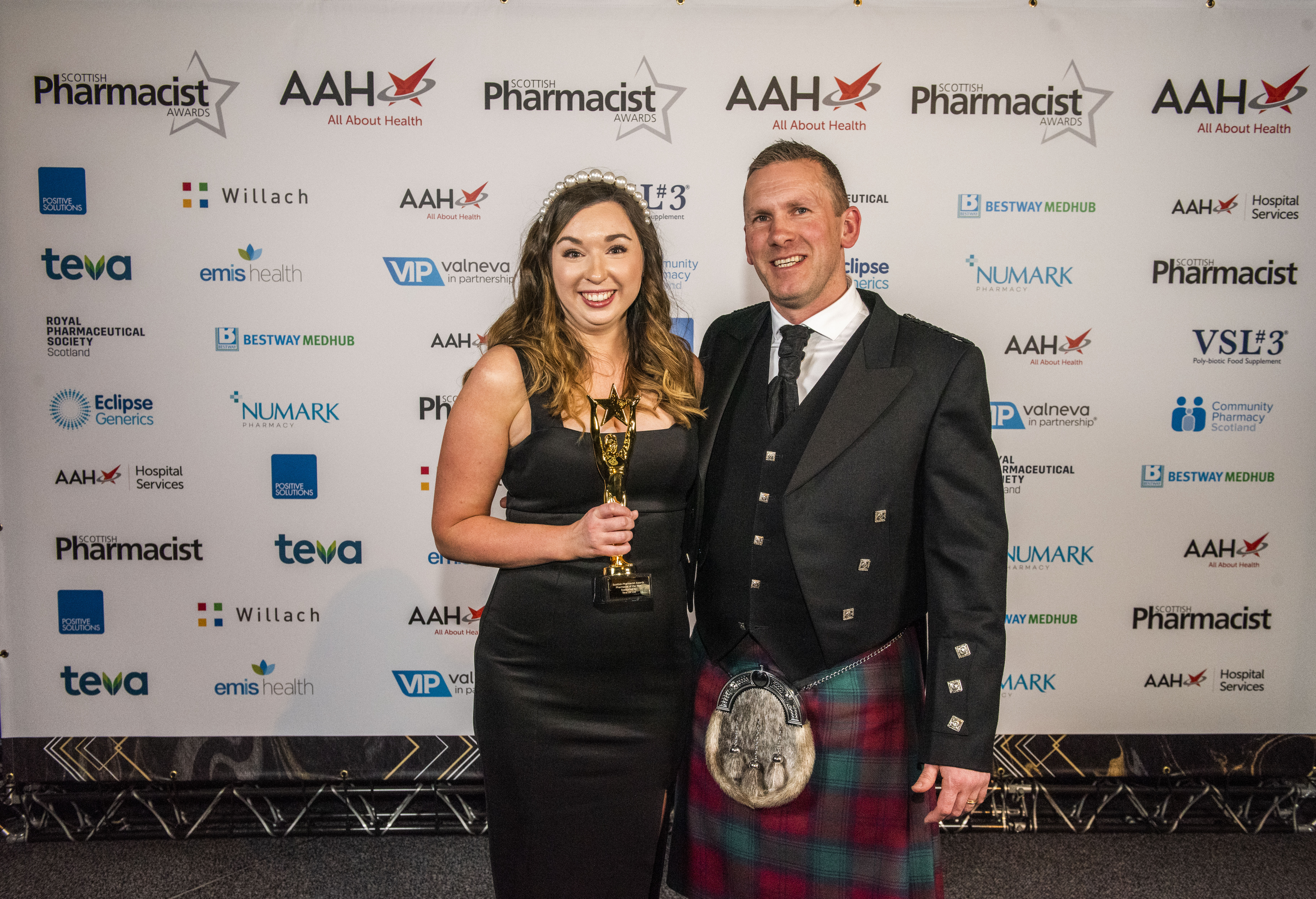 Glaswegian based pharmacist was named the recipient of the highly prestigious Pharmacist of the Year Award (Supported by Teva UK Ltd). Rachael Smith from Boots Silverburn has built up a reputation amongst colleagues and patients for providing a level of care that is second to none.

Rachael has transformed her pharmacy from one that was under performing to one that is the busiest for flu vaccinations and is also a centre of excellence for smoking cessation.

‘Her passion,’ the judges said, ‘goes beyond pharmacy, as she dedicates time to educate and raise funds for charity.’ 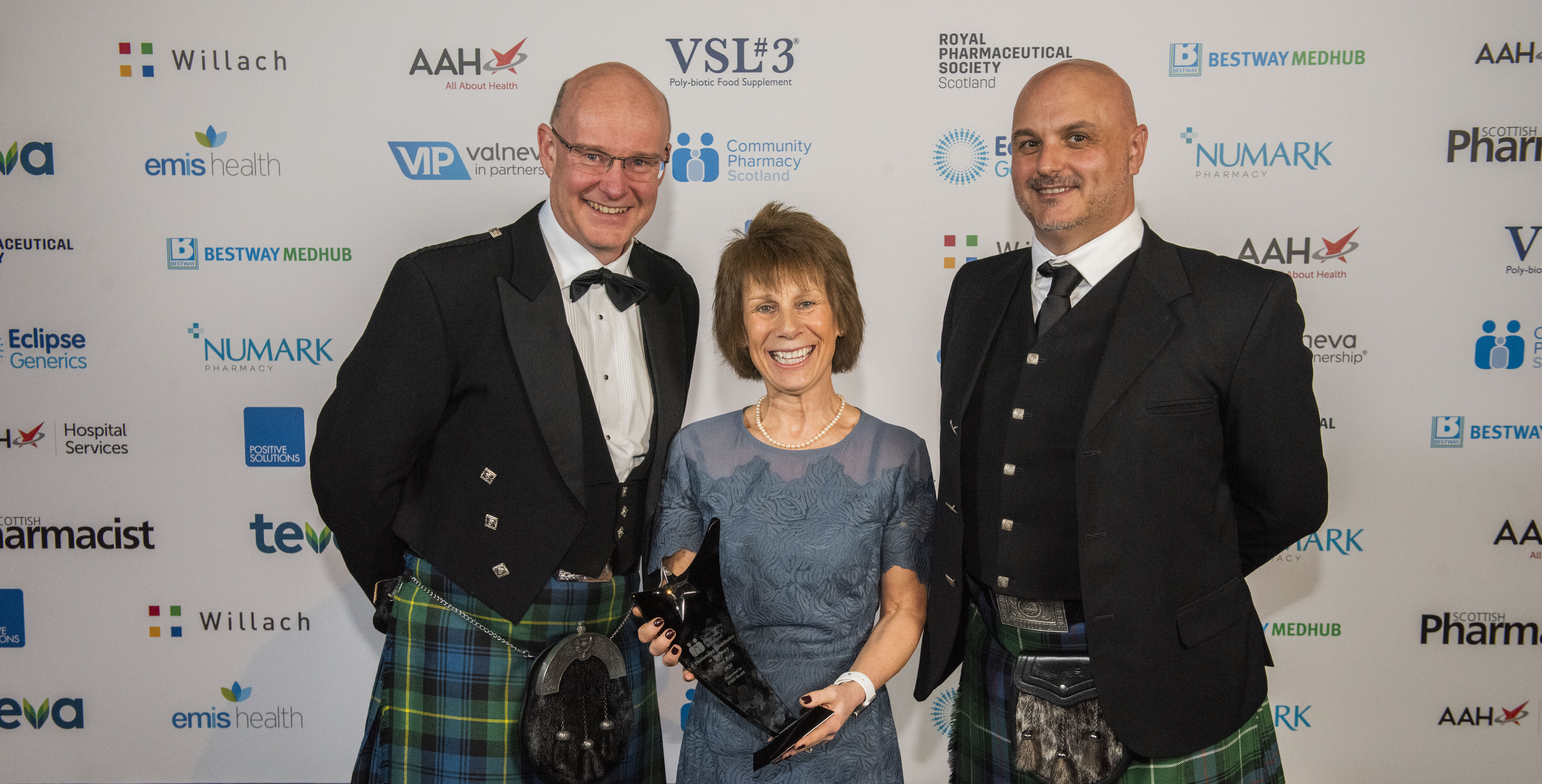 The highlight of the evening – the Outstanding Contribution to Pharmacy accolade was presented to Mrs Fiona Reid, who was not only the first pharmacist to practice as a prescriber in Scotland, but was also responsible – for – among many things across the pharmacy profession – the design, development and implementation of the UK’s first pharmacist-led hypertension/cardiovascular risk management clinic.

‘It will come as no surprise,’ Professor Harry McQuillan said in his citation, ‘that Fiona’s expertise was called upon by NHS Education Scotland in June 2008 when she undertook the NES East Region Pharmacist Prescribing co-ordinator role before graduating to NES Regional Pharmacy Practice Co-ordinator in May 2010. Here she designed, developed and implemented the highly respected ‘Teach and Treat’ centres for pharmacist independent prescribers, amongst many other things.’

‘She also served as honorary lecturer at both Scottish Schools of Pharmacy, the pharmacy representative on the Scottish Government’s Coronary Heart Disease Advisory Group, Prescribing Skills Assessment writer for the British Pharmacological Society and Medical School’s Council, Registration Assessment questions writer for the General Pharmaceutical Council and became a Faculty Fellow of the Royal Pharmaceutical Society.’

Have a question about this event? Email [email protected] 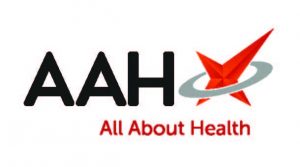