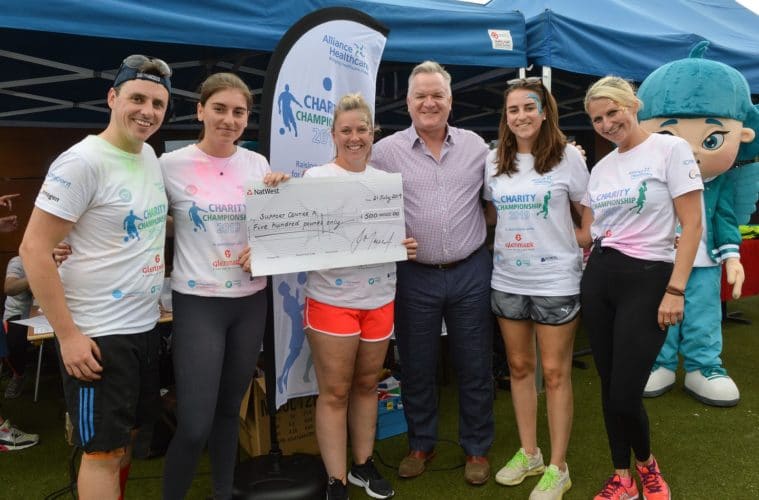 Alliance Healthcare colleagues, in association with Glenmark Pharmaceutical Limited, took to the football field and netball court at the recent Alliance Healthcare Championship 2019. The annual event is a firm favourite in Alliance Healthcare UK colleagues’ diaries and raised over £50,000 for cancer research and ending child malnutrition. Now in its seventh year, this year’s event was again held simultaneously in two locations on Sunday 22 July – Manchester, in the north, and in the south, Sunbury-on-Thames.

The event continues to grow in popularity with complimentary family-friendly activities at the event including: bouncy castles and inflatable challenges, rodeo bull, ice-cream, face painting, balloon making and special artistry from the Graffiti Kings!

Julian adds: “Our efforts are helping to end child malnutrition through our partnership with Vitamin Angels – and save lives and strengthen our fight against cancer through our partnership with the EORTC and fundraising for Action Medical Research. I’m delighted to see our fundraising support continue to evolve and bring even more people across the UK business and healthcare industry together for these great causes!”

Katelyn Harbison from Vitamin Angels attended the south event and said: “Today has been as exciting and enjoyable as we hoped. It’s wonderful to meet so many people supporting our work and helping us to make a real difference; together we continue to fight childhood malnutrition in the UK. and across the world. Malnutrition is the number one cause of preventable childhood deaths. Just 20p has the power to save a child’s life and so this one event has helped reach thousands of children and will really make a difference.”

Alliance Healthcare thanks all its sponsors for their generous donations fundamental to the success of the Championship and Family Day event. Sponsors Crescent Pharmacy Ltd, and Ennogen also took part in the sports competitions, with Ennogen winning the football plate competition in the south.