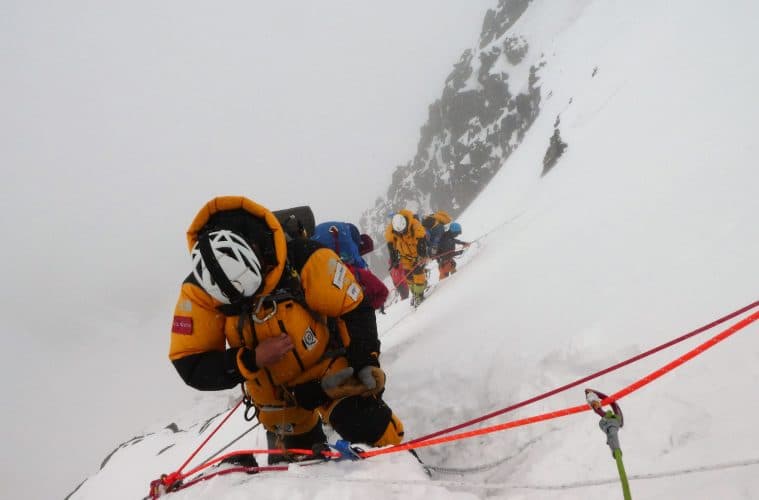 NUTRITIONAL supplement maker Pharma Nord has helped intrepid climber Noel Hanna to conquer the fearsome K2 mountain.
The company, which is celebrating its 30th anniversary this year, supplied its award-winning supplements to help Noel become the first person from Northern Ireland to successfully scale K2 – the second highest mountain in the world.

Pharma Nord, which is based in Northumberland, also provided sponsorship for Noel, from Dromara in County Down, to help him successfully complete the six-week trek to the 8,611m-high (28,251 ft) summit in the Himalayas.

Pharma Nord has previously helped the 51-year-old on a series of successful climbs across the globe over the past nine years, including the world’s highest mountain, Everest, which Noel has scaled no less than eight times.

However, while K2 is not quite as high as Everest, the climber and adventurer reckons it was his toughest challenge to date.

Noel said: “It has been the hardest climb I’ve done, no question. K2 is a lot steeper and a lot more technical than Everest with more rocks and ice to contend with.

“The traverse on K2 is very dangerous and the bottleneck section which you reach after camp 4 over 8,000 metres up is probably the most dangerous part.

“However, we were fortunate with the weather window which we had up there. You can go to K2 and be the best climber in the world, but if the weather doesn’t allow you, you won’t be able to make the summit.

“I’ve attempted to climb K2 twice before – in 2015 and 2016 – but both times no-one summitted at all because avalanches destroyed all our camps.”

Having come close before, how did it feel to finally reach the top of K2, known as ‘the Savage Mountain’ because of its extremely difficult ascent?

“It was a great feeling to reach the top,” admits Noel, a former police officer with the Police Service of Northern Ireland.

“However, reaching the top means that realistically you are only half-way there because more people die coming down from the summit than going up.”

Whilst in training for his successful K2 climb, Noel took a range of Pharma Nord supplements, including Bio-Quinone Q10, Bio-Pycnogenol, Bio-Fish Oil, Bio-Multi Vitamins and Bio-Biloba.

He also took supplies of Bio-Quinone Q10 and Bio-Biloba along with him to take throughout the six-week trek to and from the peak of K2.

Noel explained: “I take the supplements every day and whenever I am climbing, on every expedition I always take Bio-Quinone Q10 to help with muscle recovery and energy and Bio-Biloba to help with circulation.

“K2 is almost like Everest in that there is only 25 to 30% of the normal oxygen near the peak, which makes it very challenging on the body so any extra help you can get is invaluable.

“I first came across Pharma Nord supplements in 2009 when I met the company’s managing director, Bent Henriksen, who recommended them to me.

“I’ve been taking Pharma Nord supplements ever since and I really believe in them – they really help me to do what I do.”

Bent Henriksen, managing director of Pharma Nord UK, has personal experience of Noel’s climbing capabilities, having previously accompanied the Northern Ireland mountaineer on successful climbs of one of Europe’s highest peaks, Mont Blanc, and Mount Kilimanjaro in Kenya – both completed when Bent was in his 70s.

Bent, who celebrated his 80th birthday earlier this year, said: “We are delighted that Noel has been able to successfully climb K2 – it would seem to be a case of third time lucky for him!

“It is well known how difficult and dangerous a mountain it is to climb so this is a terrific achievement for him and a real landmark to be the first person from Northern Ireland to have successfully conquered K2.

“Noel has achieved some incredible things over the past nine years since we have been supporting him in his adventures, but I think this one tops the lot so far.

“It is really rewarding for us as a company to know that the work which we do in producing high quality, pharmaceutical standard supplements is helping people achieve the amazing, in whatever field or stage of life they are in.

“We can’t wait to see what Noel will be attempting next!”

The Northern Ireland adventurer is now off to climb Mount Elbrus – Russia’s tallest mountain – for what will be the ninth time and is setting his sights on another ambitious target.

He said: “I would love to be able to climb Everest or K2 without taking oxygen – that would be a huge challenge.”

And Noel has a message for those who think only elite athletes are capable of taking on the highest peaks and biggest challenges.

He said: “It’s possible for anyone to do climbing – an American guy climbed Everest aged 72 and Bent climbed Elbrus and Kilimanjaro in his seventies.

“It’s about putting in the work, putting in the training and preparation and looking after your body, which can do a lot more than people think it can.

“The mental side of things is really important – that is probably the biggest challenge which you face on expeditions. Being able to cope with different scenarios, staying positive and keeping going are key to any successful climb, just as they are with everyday life.”

Further information on Noel Hanna’s adventures can be found at http://noelhanna.com/

PIC CAPTION: Top of the world – climber Noel Hanna during his successful ascent of K2, supported by Pharma Nord UK.