Specialist business property adviser Christie & Co has successfully completed on two sales of pharmacies in Scotland, John Kennedy Pharmacy in Dunoon and Islay Pharmacy on the Isle of Islay off the west coast of Scotland.

Located on the Cowal Peninsula in Dunoon town centre, John Kennedy Pharmacy occupies a busy trading location as one of four pharmacies on Argyll Street and is one of the busiest, dispensing c. 8,500 items per month. The well performing pharmacy has a strong reputation for excellent service in the local community, with the premises presented to a high modern standard and comprising a spacious dispensary and retail area. 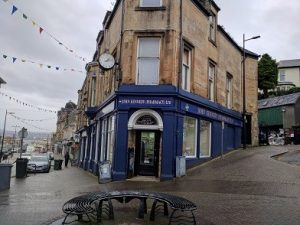 The previous owner Mr John Kennedy, who had operated the pharmacy since 1992, decided now was the right time to retire and comments, “Having owned my pharmacy for more than 25 years, I decided that now would be a good time to retire. I contacted Karl at Christie & Co and within just a few weeks he had introduced my pharmacy to his contacts and I was very happy with the outcome of the negotiations. Many thanks to Karl for all his excellent help and advice leading up to the recent sale of my pharmacy. I got several very good offers of above the asking price and would certainly recommend your services to anyone thinking selling their pharmacy.”

The business was purchased by the Right Medicine Pharmacy group, who now own and operate over 20 pharmacies across Scotland. Noel Wickes, Managing Director of Right Medicine Pharmacy, comments, “We are delighted to have been successful in acquiring such a high quality pharmacy. As one of Scotland’s fastest growing pharmacy groups we are constantly acquiring businesses and Karl and the team at Christie & Co always work hard to make the process as smooth as possible for both vendor and purchaser alike”.

Karl Clezy, Director at Christie & Co, who handled the sale, comments, “Despite the pharmacy’s unique location, there was still strong interested as turnover was in excess of £1million. Several offers were made at the closing date, which helped the owner achieve a premium price for his business, in excess of the asking price of £1,450,000.’

In the same week, Christie & Co also sold Islay Pharmacy, the only pharmacy on the Isle of Islay, located in the centre of Bowmore, the island’s administrative capital. 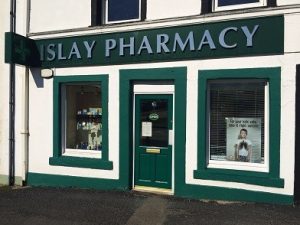 The business was purchased by Mr Sanjay Majhu, an existing multi-site operator from Glasgow who bought the pharmacy to add to his growing west of Scotland portfolio, which includes Inveraray and Tarbert.  Mr Majhu also bought the neighbouring house from the owner for his pharmacy manager and locums to reside in whilst working in the pharmacy.

Karl Clezy, Director at Christie & Co, who handled the sale, comments. “This long running business was performing well with a turnover in excess of £500,000, dispensing 3,400 items per month, with the benefit of being the only pharmacy in the small community of Islay. Interest was high from day one, despite the unique island location, and buyers were phoning from across Scotland, England, Northern Ireland and Southern Ireland before the business was purchased by a Scottish operator.”