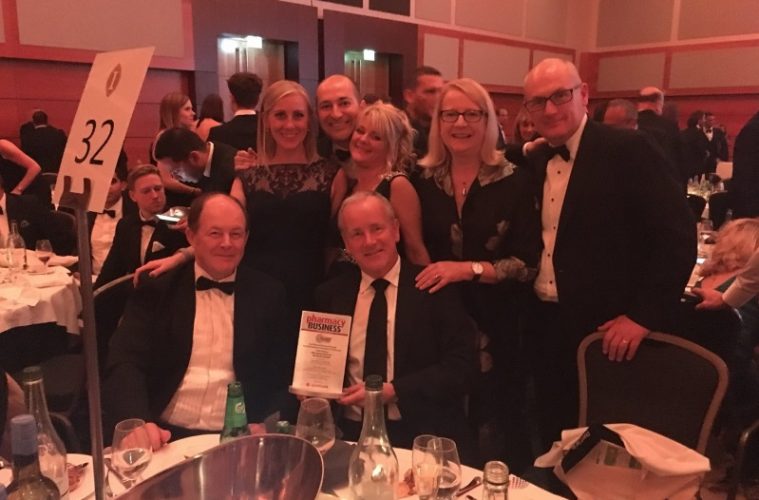 The annual Pharmacy Business Awards were held on Thursday 5th October at the O2 Intercontinental in London.

These prestigious awards recognise the best of the best within the industry and John D’Arcy was awarded the Carl Attewell Memorial Award for Outstanding Contribution to Pharmacy 2017.

Carl Attewell, was Senior Vice President & Head of Europe at Glenmark pharmaceuticals and was one of the leading figures in the pharmacy channel, who sadly passed away earlier this year.

This award recognises the incredible work John has done over the years in support of community pharmacy and also his passion for relentlessly fighting the cause for independents across the country.

The award was presented to John by Mr Achin Gupta, Vice President for European Business at Glenmark who said:

“Our winner is a born leader who has dedicated most of his working life to our profession. Widely admired for his leadership skills, passion and dedication to pharmacy, he has led, with great distinction, two of the profession’s leading organisations. A pharmacist and lawyer by training he has helped steer our industry through some of its most difficult times.  And he has been its voice of reason, pushing and nudging the profession forward over three decades.

Earlier this year he announced his retirement from the front line but we’re sure it won’t be last we’ll hear from him.”

John D’Arcy will retire from his position as Managing Director at the end of January 2018, after 10 years’ service with Numark and 37 years within the industry but will remain as Numark Chairman for a period of at least two years to oversee the ongoing progression of Numark.