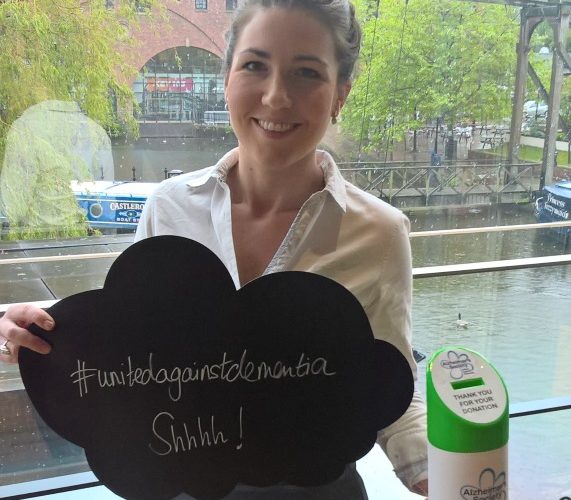 WELL RAISES AWARENESS OF DEMENTIA THROUGH THE POWER OF SILENCE

Well, the UK’s largest independent pharmacy chain, raised awareness of a later stage and lesser known symptom of dementia – losing the ability to speak.  The Head of Corporate Communications for the company pledged to only communicate non-verbally for 24 hours to increase understanding of the impact of this devastating disease.

It’s common for people with dementia to have increasing difficulty speaking and they may eventually lose the ability to communicate verbally completely.  The NHS advise that it’s important to keep trying to communicate with people living with dementia, and to recognise and use other, non-verbal means of communication, such as expression, touch and gestures.

Stephanie Mizon, Head of Corporate Communications at Well, remained silent for 24 hours during Dementia Awareness Week (14th – 21st May 2017).  Reflecting on her experience, she said: “It was exhausting, frustrating and surprising.  I didn’t expect it to be so difficult and it has opened my eyes to what people with dementia have to overcome on a daily basis.

“Other people were the biggest challenge – some colleagues were visibly impatient because communication is obviously slowed down when you have to write everything down or find new ways to get your message across in meetings.  Some people just stopped connecting with me altogether and I felt very isolated.  At home, one of the hardest things to deal with was not being able to say goodnight or I love you to my husband”.

The challenge also positively impacted children in the local community.  A Dementia Friends Champion from Well, Elaine Hand-Griffiths, accompanied Stephanie to her 5th Davyhulme Brownies group near Urmston in England to educate them about dementia, and encourage the youngsters to make a commitment to helping people with dementia to live well.

Stephanie added: “This experience has taught me that I need to have more patience, tolerance and compassion for people who perhaps find it difficult to articulate themselves – give them time to find their own words and help them recover their memories.  I feel more confident to identify someone who may be living with dementia, and better equipped to be able to offer them the right kind of help”.

To support the United Against Dementia campaign, the company also ran a series of Dementia Awareness Sessions, raising the number of Dementia Friends to 6,159 (88% of the entire organisation), including 441 colleagues in Scotland. Well is aiming to be 100% dementia-friendly across the UK during 2017.  Funds raised at the head office in Manchester city centre totalled £60 and were donated to the Alzheimer’s Society.